Interview of Scenarieconomici.it to Warren Mosler, the US economist founder of postkeynesian economic school of Modern Money Theory

Here the interview of Scenarieconomici.it to  Warren Mosler, the US economist founder of postkeynesian economic school of Modern Money Theory is again in Italy, he’s been invited by the University of Bergamo as “Visiting professor”, due to the effort of Prof. Stefano Lucarelli (Monetary policies). Mosler will meet and discuss with several heterodox italian economists (Claudio Borghi, Emiliano Brancaccio, Sergio Cesaratto, Nino Galloni). The plan on website www.retemmt.it 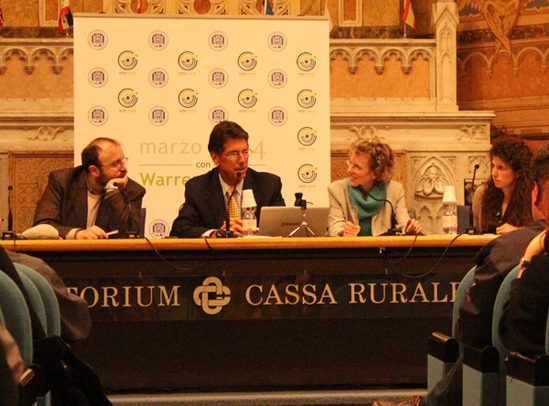 1)      What is the most important point that must be clear for a student that approachs MMT?

ME/MMT is about how a currency works and interacts with the real economy.

2)      “Monetary sovereignty” is a common principle today, but it’s more difficult understanding howthe State could generate wealth by using deficit spending. It’s a thinking that goes against the “common sense”. Could you explain it in few words?

ME/MMT makes it clear it’s not about generating real wealth, as it’s true you can’t get something from nothing.  ME/MMT shows how there is no unemployment when there is no state currency and no state taxation, and that unemployment is the result of specific policies, and not an ‘act of God’.  That is, government policy can restrict employment and the activities that create real wealth, and removing those restrictions can restore that real wealth creation.  Additionally, ME/MMT is about how public infrastructure can enhance real wealth or, alternatively, it can destroy it.

3)       Someone thinks that MMT fits only to USA because the US dollar is the international reserve currency. If this would be true, MMT wouldn’t be applicable to the other countries. How could you answer about this issue?

ME/MMT analysis applies to all currencies.  Yes, it is true that many nations hold $US reserves is a benefit to the US, but that is a separate ME/MMT discussion.

4)      What is the thing that a State with monetary sovereignty should absolutely avoid?

5)      If you would be Ministry of the Economy, how would you help Italy to “revive”? Could you explain to us the principal actions you would take?

First I would petition the EU to relax the deficit limits to 8% of GDP from the current 3% limit.  At the same time I would ask that the implied guarantee of member nation debt be entered into law.  And I would also ask the EU to have the ECB fund a transition job for anyone willing and able to work to facilitate the transitions from unemployment to private sector employment.

6) You know perfectly that Italy lost (between 1995 and today), the 18% of GDP related to EUaverage value, and that there is, in European economic context too, an increasing trend into decline. It’s clear that there are structural problems in Italy and, in addition to this, that Italian economy didn’t adapt itself to a fixed exchange rate monetary system. Do you recommend that Italy should exit from Euro? How should the euro-exit be done, technically?

First I would petition the EU for the above modifications, and give them no more than 90 days to respond.  If they refuse, I would have Italy begin taxing and spending in lira to enact the recommended changes needed to sustain full employment.

7) On www.scenarieconomici.it we support the position that it’s necessary a significative reduction of public expenditure and a contemporaneous reduction on the level of taxation, and a releasing of investments, and we elaborated detailed proposals about these points. Do you think that these type of plans would be really applicable in Italy?

Italy and the rest of the EU needs larger public deficits.  This can be done with tax reductions and/or spending increases, but if the deficit is not increased the unemployment will continue.

8) In your opinion the italian public debt should be honored as it is, or should it be repudiated and restructure it?

With my above proposals the debt would be ‘honored’ and remain as the net savings for the economy.

9) Thank you for this interview. May you send to our readers a message of hope in the future?

There is hope when the leaders begin to understand that the public deficit needs to be larger rather than smaller.