Giuseppe Conte, the Peacock who is throwing Italy through the drain 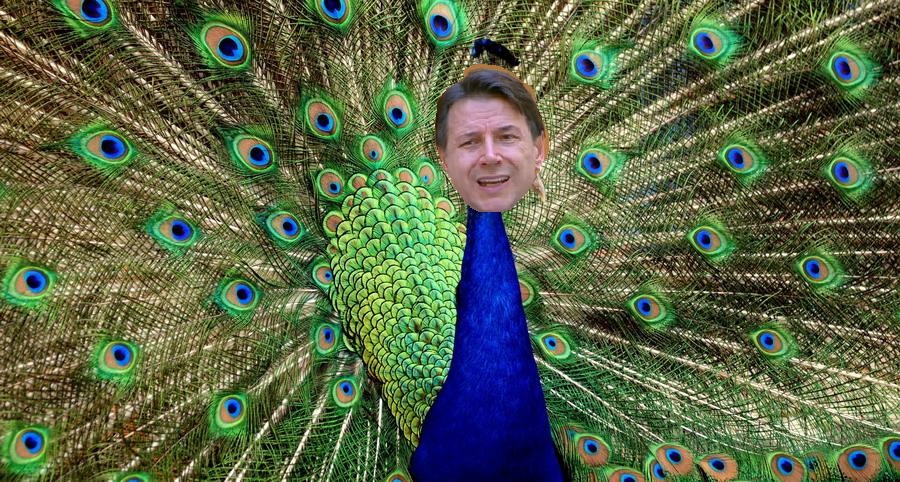 Giuseppe Conte is only a Peacock. Really a beautiful beast, which takes a lot of appearances and looks and which, in fact, knows how to appear splendid, but also useless, unable even to fly for long stretches and without a peculiar capability. But, as a political beast, the Peacock is even harmful

In the last press conference, or we could better call it media show, Conte took the idea of the journalist Napoletano about the “General Assembly about Economy”. Probably it was he himself who suggested this idea to Napoletano, given that the former editor of “Il Sole 24 Ore” has always shown to be more interested in the quality of the steaks brought to his office than into Economics.

Actually, Giuseppe Conte thinks only of his direct and immediate personal gain. He has no prospect or aim other than “El mio Particulare” “My strictly personal reward”, as Guicciardini would have said. Moreover, he has no  political culture or roots, he doesn’t come from any tradition, nor from that of the Right, of the Christian Democratic centre or of the Communist left. His personal tradition refers, at most, to that of certain Renaissance lords: “Franza o Spagna, purchè se magna”, “France or Spain, the highest bidder wins”.

Now his interest is to build his own personal political movement, which carries with it what remains of the failed Five Star Movement and converts it to his own personal ambitions. He has no profound political plan of reform: in fact, when he speaks of the Italian Consitution,  he says banalities,  and his program is only  smoke and mirrors. In Economics he is even more superficial, as his only plan is gaining time, even months until some mysterious “European Fund” shall arrive and shall justify his inaction. He does not understand anything about Business, otherwise, he would have acted immediately, putting real money into the economy, immediately, as those who understand economics did: China USA, Germany and the United Kingdom. Without knowledge of the matter he postponed everything to the future with “Tax Credits” and “Guaranteed Loans”, without realizing that, when this future will come true, it could bring him a deadly mix: economic depression, lack of tax revenues and a banking system to bankrupt.

A person without any moral scruples like Conte should be always feared,  as his fellow government allies of the Democratic Party and Italia Viva are realizing it. The “General Assembly” of the Economy is now useful only for the Peacock, but is useless for the other political parties: they will have only a reunion for a bunch of stakeholders from different social positions, all hungry for grants and money, but without any capability to satisfy them. There is not even a vague idea of growth program to be proposed and everything would be just another Show for Conte at the expense of the last credibility remnants of his allies. How can you think of having a profitable meeting without having any idea of the funds available, how to have them, what plans to discuss?

Here lies the discontent of the Democrats and Italia Viva towards Conte. The Five Star Movement, third party of the actual majority, doesn’t even exist anymore, reduced to a group of superficial opportunists living for the day. But Conte will lead them to political suicide in order to carve out their own space, and the weak Zingaretti, the so-called Democratic Party leader, will allow him to enact his plan. We’ll see if Franceschini deputy leader of PD,  and Renzi are also so pliable. However, we have a loser in this game: Italy. We’re going down the drain, all because of a Peacock.